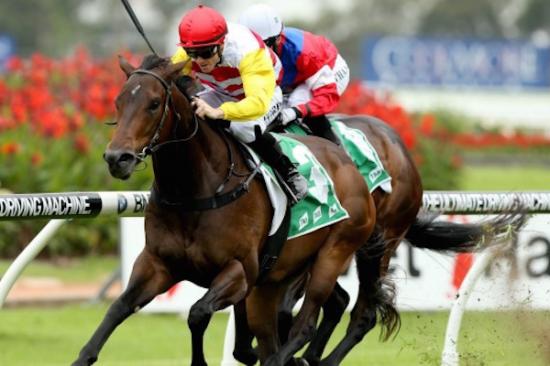 Fell Swoop and Bitburg might have similar records, but for Canberra trainer Matthew Dale the only similarity between the two horses is that they live next to each other at his stables at Thoroughbred Park.

Bitburg will jump in the benchmark 68 handicap (1100 metres) at Rosehill on Saturday, where the three-year-old gelding was the $3.50 favourite.

Just like Fell Swoop did, Bitburg has four wins from his first five starts, including a win in Sydney.

It took the son of Not A Single Doubt's overall record to eight wins and a place from the four-year-old's nine starts.

But Dale said unless a horse ran in similar races then you could not draw comparisons between the two.

"I don't look at them the same, these two horses, apart from the fact they live next door to each other, that's about as close as I've got them," he said.

"I look at them as individuals and Bitburg's still a raw product that's doing a good job."

That being said, Dale was confident Bitburg would put in a good showing in Sydney on Saturday.

"It looks like quite a good race for him. He's been lumped with a fair bit of weight [61 kilograms] because of his good record, but we've offset that by putting [apprentice jockey] Koby Jennings on, who's riding really well at the moment," Dale said.

"It's a tricky little race, three-year-old races are often hard to line up because horses can improve so much off a break."

Fell Swoop has been back in Dale's stables for about a month after having a spell.

Dale will look to give his stable star a jump out in about a month and will firm his plans for the gelding from there.

All going well, Fell Swoop will start in the group 1 Oakleigh Plate (1100m) at Caulfield on February 27 before pushing on to the group 1 Galaxy (1100m) at Rosehill three weeks later.

The four-year-old captured the imagination of the racing public last preparation, not just because he kept winning, but also because of the manner in which he won - showing plenty of heart.

"He'll look to resume late February, but we won't firm up his program until he gets to the jump out stage, where I can get a really good guide on how he's come back," Dale said.

"The Oakleigh Plate is still on the agenda, but very mindful [that] I would like his second-up run to be The Galaxy, which is in Sydney three weeks after the Oakleigh Plate."