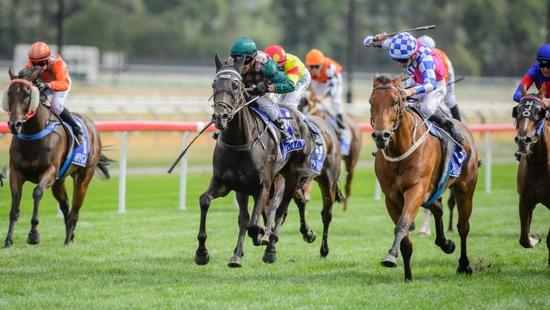 Dale made it three in a row for ACT trainers who were booted from the the $60,000 Highways Handicaps in December after Racing NSW ruled Canberra's facilities gave them an unfair advantage.

Canberra Racing Club 'saved the industry'in the capital by introducing the Federal to be run at all of its meetings this year.

Dale was pleased Fun Tickets found a way to grind out the win without luck as the favourite came late to pinch it on the line.

"First up at the Federal two weeks ago was very encouraging and indicated a step out to the 1400 metres would suit," Dale said.

"Through the run he got back further than anticipated and didn't have much luck but Nick was very patient, he didn't panic when he wasn't getting all the luck at the top of the straight and kept him balanced at the top of the run.

"That was my first Federal win, hopefully the first of many because it's a really good concept, we'll always be looking to run if we've got a suitable horse."

Canberra Racing boss Peter Stubbs said an initial lull in work for Canberra trainers following the Highway ban had corrected itself and Dale praised the club for its initiative.

"A lot of people put weight being in the Highways and when we got kicked out it looked detrimental to most people's business in Canberra, so it was a great concept to come up," Dale said.

Heywood and Dale also found success in race five when three-year-old filly Further To Fly saluted over 1300 metes in her second start.

Dale will head to the Sapphire Coast this weekend as his preparations for Black Opal Stakes day begins to take shape.

"I'll be hoping to have a number of runners on the day, Hermosa Beach in the National Sprint and Clipper in Opal 1000m and possibly Further To FLy to the Guineas if she progresses again," Dale said.