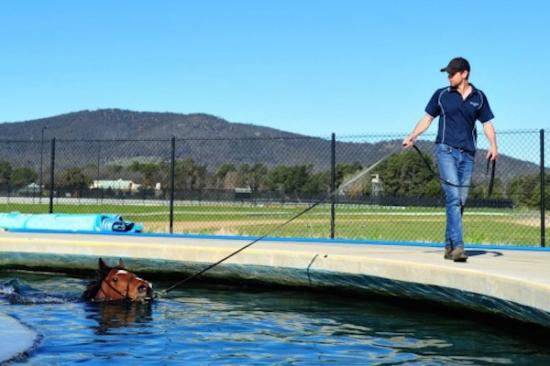 The Canberra Racing Club will introduce a $50,000 race at every meet next year in a move ACT trainer Nick Olive says has "saved the business" in the capital.

The 'Federal' will start in January after Canberra trainers were controversially booted from the Highway Handicaps this year.

Canberra horses were banned from the $60,000 Highways, a weekly race in Sydney for country trainers, after Racing NSW ruled the ACT facilities gave them an unfair advantage over regional rivals.

Seven Canberra horses will run in their final Highway Handicap at Rosehill on Saturday, with the ban enforced the following day.

"For sure trainers would have left, I know a lot were thinking about it, so this is sensational news and the club have a done a really good job consulting with the trainers," Dale said.

"It's really saved our business to be honest and made training horses in Canberra a really lucrative business again."

The Federal, which begins on January 5 and has $1.25 million in prize money on offer throughout the year, is open to Country NSW trainers but only Canberra trainers will be eligible for a $10,000 bonus.

ACT trainer Matt Dale said Canberra had responded terrifically in challenging circumstances and praised the club for taking the initiative.

"Certainly racing in country NSW is thriving and us being a part of that for so long then having it dragged out from under our feet... this initiative really did come at the right time and was greatly needed," Dale said.

"It was getting to the point where it would be become unsustainable from a commercial point of view to train in Canberra.

"We've been placed in a very awkward position by racing NSW over the past year and it's great to see Canberra Racing Club being so proactive and come out on the front foot.

"I've got a fair few horses coming up that would have loved to be racing in the Highway Handicaps and now we have to adapt but it's pleasing to see there is some light at the end of the road."

The race will cost the Canberra Racing Club $740,000 annually if they cannot attract a major sponsor, but chief executive Peter Stubbs said it was important ACT trainers didn't miss out.

"We think it's important that the thoroughbred racing industry in Canberra has the same opportunities of neighbouring jurisdictions," Stubbs said.

"The Federal is quite an exciting concept for thoroughbred racing in the ACT and $50,000 certainly puts us at a level above many of the states and territories outside Victoria and New South Wales.

"Our turnover this year is tracking extremely well and that will be part-funding the Federal race but the Highways in Sydney are recognised as the TAB highway, so we're hoping to a attract a significant sponsor.

"We're hoping it's a name that becomes synonymous with Canberra racing the same way the Highway and the Everest have and over time people recognise the Federal as good prize money that can be won on every race program."

Thoroughbred Park hosts 25 race days each year and the Federal will take the annual prize money in Canberra to $5.6 million.

Canberra Racing chairman Paul Meiklejohn added: "Prize money is a significant economic driver of the racing industry and is important that the ACT thoroughbred racing industry have similar opportunities to that on offer at other racing jurisdictions."