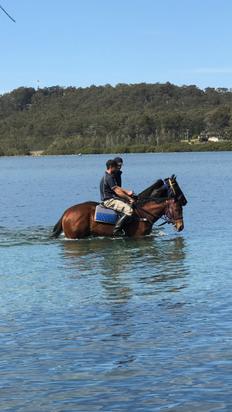 A second training base at Mourya could turn out to be the secret weapon Matt Dale needs to coax a career best performance out of his Everest runner Fell Swoop.

The idea for the stable, to complement his Canberra operation, came when Dale took himself to Warrnambool earlier this year to see how Darren Weir makes use of a beach environment for some of his horses.

“I went down to Darren’s stable and rode a bit of work for him for a few days. It was an itch I had to scratch,’’ Dale said.

“I just did it out of interest but the next week we put the kids in the car and drove down to Moruya to have a look.

“The horses are able to go to the beach or wade in the river and it’s just a different environment for them.’’

Jamie Stewart, an ex-foreman for Leon and Troy Corstens in Victoria, runs the Moruya stable, which has only been open for about six weeks, and Dale has had Fell Swoop based there since his second-up eighth in the Premiere Stakes (1200m) on September 30.

The six-year-old, to be ridden by Tye Angland, was selected by slot holder Inglis to run in the $10 million TAB Everest (1200m) at Royal Randwick but it’s fair to say the best of him hasn’t been seen in his two runs back.

Dale said since he’s had the gelding out of the cold Canberra air his coat has started to blossom and with it the trainer’s confidence that he can get the best of the horse.

“When I was down here last Friday (week) and saw how well (stablemate) Zafina has done in the five days she’s been there it planted the seed to send Fell Swoop there,’’ Dale said.

“His coat has come along nicely and he’s very happy and relaxed.

“He had a horrible run the other day, with how firm the track was you can’t sit three wide and sprint off it. I think the performances have been sound without getting conditions and runs to suit.

“The whole way along I said he’ll need the first two runs to be improving into the Everest. He’s come through the runs well and in an ideal world I’d like to see a bit of sting out of the track.’’

While Fell Swoop’s two runs since a spell have been below par on face value the fact is he’s only been beaten two lengths (in the Shorts) and three lengths (in the Premiere).

Consequently he’s drifted from a $26 chance to be co-outsider at $51 which doesn’t reflect the fact he’s featured in the trifecta of the last two runnings of the Group 1 TJ Smith Stakes (1200m).

Dale said he recalled a similar thing happening back in the autumn prior to his gallant third in this year’s behind Chautauqua and English.

“Before he ran in the TJ earlier this year he was beaten a few lengths in the Oakleigh Plate and was a behind them again in the Galaxy,’’ he said.

“Then in the TJ he ran out of his skin after carving it up in front with Russian Revolution. He has shown he can come on third-up.’’

What would winning the Everest mean to a trainer like Dale, who is 35, with a limited number of horses in work outside the metropolitan area?

He hasn’t actually allowed himself to think about that just let but he’s grateful that Inglis have had him along for the ride.

“It’s been an unprecedented build up for us with a lot of functions and media commitments,’’ he said.

“It’s calmed down for me since I switched down to the Moruya stable, which I don’t mind because I can just worry about the horse.

“It’s good exposure and it’s a once in a lifetime opportunity when you have a smaller stable. To be one of 12 running for a $10m race it’s a unique opportunity.

“I haven’t had time to get excited yet because we’re worried about getting the horse there in the best order we can.’’