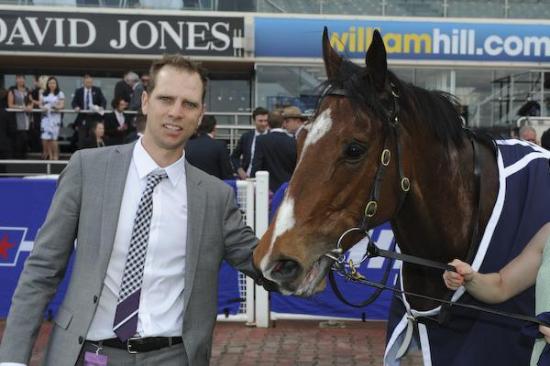 An 11-race field for Friday night’s Manikato and who’s the odd one out?

That’d be Fell Swoop, the only horse in the race yet to taste Group 1 success. But is trainer Matthew Dale worried?

Not in the slightest.

“I’ve got no qualms about how things sit, every other horse in the race is a Group 1 winner, but that doesn’t concern me,” Dale tells G1X.com.au.

After two Group 1 seconds last season, you wouldn’t blame Dale for becoming a little impatient, but it's pragmatism not impatience that’s most notable when he talks of chasing that elusive carrot.

“In my eyes the Oakleigh Plate was really our only missed opportunity. He was held up, got out and got beaten a nose,” he says.

A $45,000 buy that’s won in excess of $1 million, Fell Swoop looked a good thing to progress the Salinger on Derby Day two weeks ago.

But his first-up run at Caulfield changed all that.

“Going into the Schillaci I was leaning more towards the Salinger than the Manikato,” Dale says.

“But he came through the Schillaci (where he finished third to Star Turn) in really good order mentally and physically, and that prompted me to revisit the Manikato.”

The tight turns of Moonee Valley should suit the Not A Single Doubt five-year-old, who scored over the track and distance in September of 2015.

“That was his first ever trip to Melbourne, first time going Melbourne way, so that experience can only put him in good stead.”

A nice alley, suitable conditions and a gear change will also play into his favour.

“The earmuffs in the Schillaci and up the straight in the Darley will be a good tool, but in race like the Manikato I feel like he needs to be a bit sharper,” he says.

“He certainly won’t be pulling, hence the reason to take them off.

“And gate 3 gives (jockey) Hughy (Bowman) and I options as well. There’s supposed to be a bit of rain on Friday afternoon too. A soft track certainly won’t hurt his chances either.”

While Fell Swoop will fly the flag on Friday, five-year-old Rocket Commander also runs for the stable on Saturday.

The mare will be ridden by Ben Melham in the G3 Merlin Stakes over the mile, from gate 11.

“She’s a tough thing. Hopefully it’s a good 24 hours for the stable at the Valley on Friday night and Saturday.”